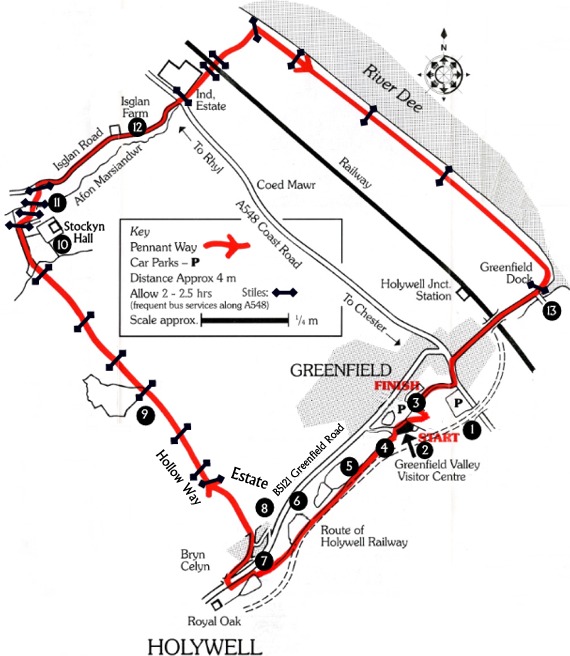 Leaving the car park, once the Basingwerk Abbey fish ponds, we follow the path upward passing on our right the romantic and impressive ruins of Basingwerk Abbey (1) founded some 800 years ago in the 12th century. An ancestor of Thomas Pennant, Thomas ap David Pennant was Abbot of Basingwerk in the closing years of the 15th century before the dissolution of the monasteries. In later years the Pennants owned part of the area, in fact much of ground our walk covers belonged to the Pennants or the Mostyn family. The Abbey is just one of many National Monuments in the Valley covering some twelve hundred years of history!

Carrying on to the Visitor Centre, (2) also the entrance to the Museum and Elizabethan farmhouse, we bear left, passing the imposing Victorian School Building (3) moved from its original site in Holywell. The interior is restored to its Victorian Days; educational to the many schoolchildren who visit for the ‘Victorian Experience’, nostalgic to those of us old enough to remember the old style schools of yesteryear! On the right, a little distance away are wagons, track and remnants of the many Tramways once prevalent in the quarries in the hills above bringing their loads of limestone down through the Valley to the Greenfield Docks.

Passing the modern building of the Abbey farm, we bear left to the Abbey Wire Mill (4) formerly operated by the Parys Mine Co., producing copper and brass wire in the manufacture of nails and pins. It is now a pleasant garden and has recently turned the clock back by the introduction of a new waterwheel to generate electricity for use in the valley.

Following the path alongside the barely discernible Old Wire Mill Reservoir, now reverted back to a stream and covered with waterlilies during the summer months. (The sharp eyed visitor may also catch a glimpse of Dippers flitting by). Below, on our right, now appears the former Lower Cotton Mill, (5) built in only ten weeks in 1785! The mill was six stories high, one hundred and eight feet long and 30 feet wide. The restored warehouse to the right of it is now a steam operated mineral bottling museum, the whistle from the stationery steam engine resounds through the valley when open and working.

Our route now leads alongside the reservoir to The Meadow Mills, (6) the design of which, particularly in the window arches, reminds us why these factories were once called the cathedrals of industry, The roof of these mills were originally clad in copper, it must have been an amazing sight in 1787 when it was built to manufacture copper goods and later, lead, tinplate and brass.

Keeping to the left we pass the outlet of the next reservoir, an impressive sight when in full spate, climb to the right and onto the walkway to this impressive expanse of water, a haven for wildlife, kingfishers, little grebe, grey wagtails and other flora and fauna, an excellent example of nature reclaiming the valley. Across the walkway and left to Celyn Car Park where our way leads across to the gate into the old Greenfield Mills (7) also known as The Battery Works. Built in 1765 these are the largest works in the Valley and housed at one time an enormous Beam Engine, the remains dominating the vast space to the left. Keeping the wall to our right we pass along the remains of a cobbled road, to yet another reservoir, where we wend our way alongside through another Nature Reserve to the Royal Oak Inn.

Our way now lies across the busy main Holywell-Greenfield road to follow the narrow lane leading steeply uphill where, as it bends left we pass the site of the old Bowling Green (8) which Pennant describes as a meeting place for worthies to meet once a week, no doubt retreating to the nearby Inn (Now Greenhill Farm) for refreshment! The lane now leads to that farm but our route carries on through the stile into a hedged path that leads over another farm road into a disused and sometimes overgrown track. This is a medieval ‘hollow-way’. I doubt whether the occupants of the recently built estate, where it winds its way upward at their rear, are aware of this ancient highway. We suddenly emerge from the rather claustrophobic confines of the track into a large field where the hollow-way continues alongside the hedge on to the moor.
Our way leads diagonally across the field toward some tall trees in the distance. Keeping to the marked path it leads us to a small copse and stile. This is where the ancient Moor Quarries (9) were situated, supplying sandstone to the area.

This is an excellent place to stop and admire the amazing views across the estuary and beyond. On a clear day it is possible to see the Lancashire coast and the mountains of the Lake Distict. 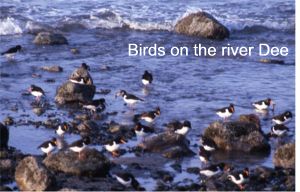 We follow the path along the hill to Stokyn Hall, (10) its shape and stone seems to nestle and blend into the landscape. It was once owned by a branch of the Mostyns of Talacre.
Passing the hall we are led along the path bearing left over a stile leading into Stokyn Dingle. (11) The path to the footbridge in the dingle is clothed with wild garlic in the spring and early summer, the scent and foliage creating a treat for the senses! Linger a while on the little footbridge to pick out the ruins and remains of the mill and imagine the rural industry that existed here, so different from the noise and clamour of Greenfield Valley. The stream is called Afon Marsiandwr or ‘Merchants River’. The ‘Merchants’ are thought to have been smugglers who ran their cargoes in to the lower reaches of the stream where it flows into the Dee!

Climbing out of the Dingle we climb over a stile leading into Isglan Road, having all the appearances of an ancient medieval way. Turning right we travel downhill passing ‘Isglan’ (12) on our left, once the seat of the Pierce family who became extinct before Pennant’s time. ‘Isglan’ must have been of great importance to give its name to the Township in which it stood. Even today it looks imposing. 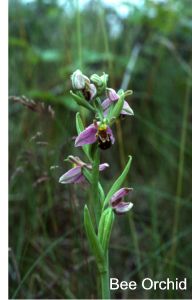 At the foot of the hill is the A548 coast road between Chester and the North Wales Coast. Taking great care, we cross this busy road to a stile and follow the footpath alongside a small factory to another stile leading to and across the main Chester-Holyhead Railway line, keeping an eye open for approaching trains, cross the tracks, continuing straight ahead to the embankments running along the Dee Estuary the earliest of which was built in the 18th century in an effort to improve navigation; the latest early in the 20th century carrying a tramway or track for the collieries that once existed along the Dee. Here we turn right. Pieces of coal can still be seen in the track as we walk on to the once important and busy Greenfield Dock, (13) one of the busiest port on the Dee in the 18th and 19th centuries not only for ships to load goods from the many mills, but also for the tramways which led into here with valuable limestone. The docks had fallen into decay but a recent programme of improvements has made it into an attractive area more suitable to todays requirements, the North Wales Path passes through on its way to Bagillt and beyond.

Leaving the Dock we travel inland over the Chester-Holyhead Railway bridge, The station to be seen is the old Holywell Junction Railway station, the best preserved on the line of the original Thomson built stations. If you look carefully the Holywell Town Railway line can be seen going from the bay at the end of the platform leading upward. We carry on down the road, turn left at the main road and cross over to our starting point, having seen in a short space of time and distance, an amazing amount of ‘hidden history’. What might at first glance to be unspoilt country can contain a fascinating insight into our past.

Images from the past


View Walk 1 in a larger map

Images from the present

Please contact us if you have any images we can add here.

Thank you very much to all our Sponsors