The walk commences in the village of Whitford. 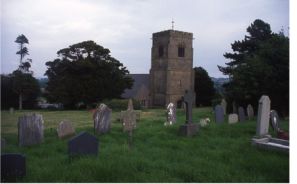 The church (1) contains the grave (unmarked) of Thomas Pennant, a memorial to him by the organ and
family memorial stones on the wall
of the south aisle. 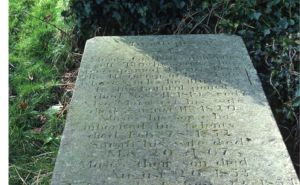 Near the north-east wall of the churchyard is the grave of Moses Griffith, illustrator of the Pennant books.

Leave the village with the church on your left in the direction of the school. Turn up the lane opposite the lodge (2). The road bends to the right and in a short while reaches a bridleway on the left (3). Go through the gate and follow this path. 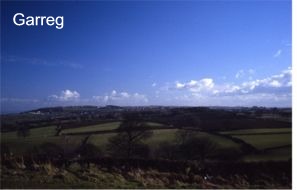 The main route is along the fence on your right and then across the field to the black bridlegate. This is Garreg Farm (5). From the farmyard go through the black farm gate on the left and up the lane, which can be very muddy. Now follow the path alongside the hedge on your right, up to yet another bridlegate. Turn left, walk up the hill and then turn right (6).

Turn right where the track joins from the right, and bear left towards the wood. Just inside the wood, take the path - stony to the left. Follow this main path until you reach the edge of the wood. Here there is a rather solid stile (7). 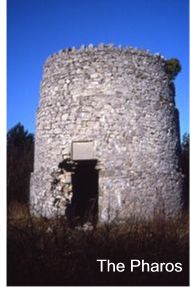 At this stage, do not cross the stile, but take the path to the right to the Roman Pharos (8), which was restored in 1897. It is described by Pennant on page 112 of his The History of the Parishes of Whiteford and Holywell:

"The Romans took advantage of this elevated situation and placed on its summit a Pharos, to conduct the navigators to and from Deva, along the difficult channel of the Seteia Portus. The building is still remaining. It is tolerably entire; its form is circular; the inner diameter twelve feet and a half; the thickness of the walls four feet four inches. The doors, or entrances, are opposite to each other; over each is a square funnel, like a chimney, which opens on the outside, about halfway up the building. On each side is a window. About four feet from the ground are three circular holes, lined with mortar, as is frequent in Roman buildings; and penetrate the whole wall, for purposes now unknown."

Retrace your steps back to the stile. Cross over and head directly across the field, as if heading for the white farmhouse in the distance. In a short while, the corner of the field becomes visible. Cross over the stile and head for the stone stile alongside the cottage. In the lane turn left. 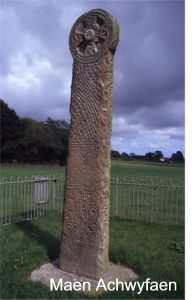 On your left is a high stone wall. This is a "pound" (9) -a field that was used to hold stray animals, the owners of which had to pay a fine to have them released. In the field across the way is a Celtic Cross. This is Maen Achwyfaen - "Lamentation Stone" (page 113):

"It (Maen Achwynfan) takes its name in all probability from the penances, which were often finished before such sacred pillars; attended with weeping, and the usual marks of contrition... I do not presume... to attempt to a guess at the age; only must observe, that it must have been previous to the reign of gross superstition among the Welsh, otherwise the sculptor would have employed his chizzel in striking out legendary stories, instead of the elegant knots and interlaced work that cover the stone."

After visiting the Celtic Cross, return to the road, taking note of the semi-derelict building opposite (in the garden of a cottage): this is the remains of a toll cottage. Pennant describes how the road went from Mostyn to Henllan and was used to transport coal to the "great limeworks" of Denbigh.

Take the bridleway passing to the right of the cottage. The start has a stony surface - follow until this runs out. Now take the track with a soft surface.

Following this track, do not go through the gate, but take the fork slightly downhill to the right and take the obvious path. In a short while, the descent becomes slightly steeper and eventually passes in front of two cottages. Walk down to the road and turn right (11).

Take the footpath to the right (12). After the black farmgate (13) you can see to the right in the woods, the remains of Pentreffynnon Hall. Follow the track through the parkland to the white gate and emerge at a big chestnut tree in the middle of the road (14). This tree is shown on early maps, before the time of Pennant.

Turn left and pass the farm on your left. Take the second set of gates on your right. The stone building on your right, next to the Dutch barn, is an old Tythe Barn (15). Go straight ahead through the gate onto the green lane.

Turn left through the gate and walk along with the wood on your right. Ignore the track (16) coming up from the lodge to Mostyn Hall and go through the gate directly ahead. Head across the field, through the dip, as if walking towards the houses in the far distance. Make for the waymark sign and turn right along the farm drive. You will now emerge at the lodge noted at the start of the walk.

Images from the past


View Walk 5 in a larger map

Images from the present

Please contact us if you have any images we can add here.

Thank you very much to all our Sponsors